End of the Year Report - Florida leads in Foreclosure Filings

Today's RealtyTrac Foreclosure Market Report for 2012 was released.  According to RealtyTrac, Florida led the entire country in foreclosure filings started within the last twelve months. 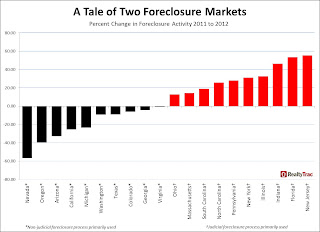 So what lies ahead for Florida in 2013?  According to Daren Blomquist, Vice President of RealtyTrac:

“2012 was the year of the judicial foreclosure, with foreclosure activity increasing from 2011 in 20 of the 26 states that primarily use the judicial process, and a judicial state — Florida — posting the nation’s highest state foreclosure rate for the first time since the housing crisis began,” said Daren Blomquist, vice president at RealtyTrac. “Meanwhile foreclosure activity continued to decline in 19 of the 24 states that use the more streamlined non-judicial foreclosure process, but there could be a backlog of delayed foreclosures building up in some of those states as well as the result of recent state legislation and court rulings that raise the bar for lenders to foreclose.
“That could mean that although we are comfortably past the peak of the foreclosure problem nationally, 2013 is likely to be book-ended by two discrete jumps in foreclosure activity,” Blomquist added.  “We expect to see continued increases in judicial foreclosure states near the beginning of the year as lenders finish catching up with the backlogs in those states, and another set of increases in some non-judicial states near the end of the year as lenders adjust to the new laws and process some deferred foreclosures in those states.”
The positive spin of the report - median home prices are on the rise.  To view the full report, click here.

Marvin L. Beaman, Jr., P.A. is a general law practice specializing in Real Estate and Probate law. Our firm has been dedicated to our clients for over 40 years. We are a two attorney law practice - father and daughter team. Marvin L. Beaman, Jr., P.A. is located in Winter Park and a short drive from Orlando, Maitland, Altamonte Springs and Longwood.